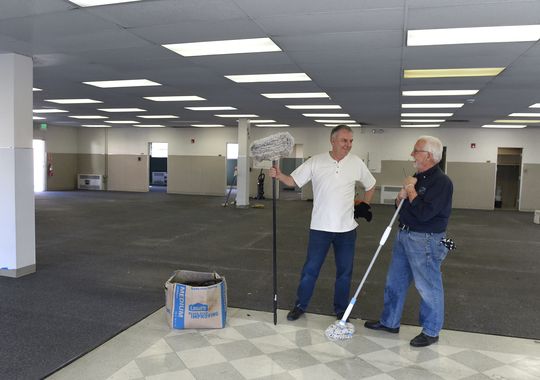 RENO, NV (July 17, 2014): VizKinect, a Reno-based biometric analytics and market research company, announces a long-term partnership with Tractus, a California based company, which has developed advanced technologies to accessorize ultrasound technologies to improve physician efficiency in the detection of breast cancer.

With their patented software, C.I.R.C.L.E.S.™, VizKinect specializes in advanced biometrics, such as eye tracking, and when integrated with Tractus’ Breast Mapper enables physicians to increase productivity. With increasing interest in ultrasound detection of breast cancer, VizKinect and Tractus will offer a unique solution to the medical industry.

About VizKinect: VizKinect, a Reno NV based company, was founded in 2011 and has developed software-based tools that offer biometric analytics for multiple applications to measure effectiveness of consumer engagement and detection of viewer awareness. VizKinect makes it possible for clients to actually see what is and is not getting viewers’ attention in real-time and their C.I.R.C.L.E.S. TM program can be applied to a wide array of applications, including advertising, product placement, and research. VizKinect currently works with advertisers to determine whether their video, digital media and print ads catch the viewer’s attention the way they are intended.

About Tractus: Tractus Corporation, a California based company, is commercializing a proprietary, low-cost, hardware and software accessory for standard ultrasound systems for the 15,000,000 women in the US who are underserved by mammography each year. Published clinical studies have demonstrated that ultrasound can double the discovery of small, treatable, breast cancers missed by mammography in dense-breasted women. Eleven states, including Nevada, have passed laws requiring that dense-breasted women be notified of their density status and instruct those women that they may wish to discuss the limitations of mammography, and the appropriateness of supplementary examinations, such as ultrasound, in their breast cancer detection decisions. Tractus’ Breast Mapper TM will greatly improve the physician effort in the breast cancer detection process.

The ecosystem of the Interstate 80 corridor through northern Nevada — its people, its economy, its lifestyle — will be spotlighted in a series of videos that are expected to launch in late summer.

The video series, a brainchild of Reno-based Biometrix Studios Inc., targets audiences that range from corporate executives looking to relocate their businesses to families thinking about a move to northern Nevada.

Biometrix Studios — the company created last winter by the merger of VizKinect and The Zap Lab — plans to finance the project through production of individual videos for companies, educational institutions and local governments along the corridor.

Content from those individual videos, in turn, will be re-edited into the three videos that market the region, says Ky Good, an Executive of Biometrix Studios.

The three regional videos include:

A multi-media plan for distribution — including placement of the videos on the Web sites of economic development agencies and organizations involved with the promotion of Nevada trade — is planned for the completed videos.

The three regional videos are scheduled for release this autumn, Good says, with annual updates planned to keep the content fresh.  Production is scheduled to begin this month.

About 20 businesses and organizations have been targeted for the individual videos that will provide the financial horsepower for the projects.  The tab for three- to five- minute videos would run in the range of $8,000 to $20,000.

If Biometrix Studios is successful with its programming on the Interstate 80 corridor, it plans to expand the concept to the Las Vegas area, Good says.

It’s not unusual for producers of B-movies to generate 80 percent of their budgets from product-placement deals.

Reno’s VizKinect is carving a niche for itself with technology that helps movie producers strengthen their pitch to advertisers and helps advertisers better understand how audiences see the placement of their products in movies.

The company rolled out technology this spring that allows marketers to see in real time how audiences view a commercial.

“We can tell them quantitatively how many people saw their product and how to improve it,” says Norman Smith, president and chairman of the privately held company.

Small dots — a separate color is assigned to each viewer — scamper across a researcher’s video monitor as the software tracks the paths that viewers’ eyes follow as they watch video programming.

The company is gaining traction with advertising agencies that want to see precisely what viewers are looking at when they see a commercial.

A test of a political ad earlier this year, for instance, found that a large majority of viewers were looking mostly at the teeth of a candidate rather than the message of the commercial.

For producers of smaller-budget films, data about viewership is likely to translate directly into more lucrative deals.

One VizKinect client, David Zito, the producer of the 1984 hit dance movie, “Breakin,’” says his latest production includes spots for product placement from more than 20 companies ranging from a computer maker to a bicycle manufacturer to sportswear and clothing companies.

He’s working with VizKinect to create data that will help him get top dollar for placements in the new hip-hop movie, “The Boogaloo Kid.” The value of product placement depends on their ability to capture the eyes of moviegoers, and even a slight shift can result in dramatically different results.

Smith points, for example, to a test of a scene from “Giant Killer Hogs,” an upcoming movie produced by Reno-based company, Antipode Entertainment, Inc. Two product placements — one for Harley-Davidson, one for Captain Morgan Rum — are part of the scene as neon signs to either side of a bar’s menu board. The Captain Morgan sign to the right of the menu drew substantially more eyeballs and could have commanded a higher placement fee. 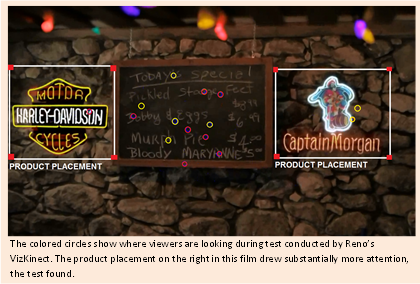 The eye-tracking technology allows for quick turnaround of tests, and VizKinect’s newly launched Web and mobile software allows producers to see the results of the tests on their own computer or mobile device.

“They can make changes as they are editing the ad,” says Bailey Hein, one of the company’s eight staff members.

Along with film producers and makers of television commercials, VizKinect is also working with videogame producers such as Reno-based 3G Studios. Smith says the company’s growth has been slowly bootstrapped as it develops new clients through referrals from existing customers as well as through the connections of its directors and advisory-board members.

Growth would be accelerated, he said, as the VizKinect is able to raise additional capital that allows it to open offices in Los Angeles and Emeryville, closer to the hubs of the movie and technology industries.