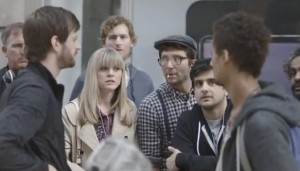 I have the feeling this commercial cost more money than it brought in.

On the other hand, let’s look at another Samsung advertisement for the same product, The Next Big Thing is Already Here. In this commercial, people are lining up for a new cell phone that supposedly has all these great features, while actors who already use the Galaxy S3 are displaying a phone that not only has all these new features, but more. Though this commercial was shot more documentary style, it showed a significantly better audience reaction. Not only did the audience see the product 37% of the time it was visible, 100% remembered what the product was at the end. In fact, 60% of viewers were more likely to buy the product after seeing this commercial, and no one was less likely.

With VizKinect, you can actually make sure a commercial will be worth your money before you spend the time to get it there. You can do more than simply have users fill out questionnaires; you can see exactly what they’re noticing when they watch your video ads. Imagine how much easier it will be to make sure you aren’t throwing your money away when you can actually see what viewers are looking at.

If they don’t even notice your product or understand your commercial, why pay for it in the first place?

Don’t waste a single dollar in bad commercials again. The advertising industry is changing. The age of crossing your fingers and waiting for cashflow is gone. Now you can make sure your product is actually getting seen by the masses instead of disappearing in the massive commercial overload.

Still unconvinced? Check out our Samsung Advertising Report below to get more information on how the study was conducted and the actual numbers we came up with.

Otherwise, get started with VizKinect today and never worry about your commercials again.

If you haven’t already, begin by watching the 1 minute clip above from a popular Iron Man 2 fight scene.

Notice any particular product placement in this Iron Man 2 clip? Before I reveal what the product placement was, let’s quickly analyze why an advertiser would find appeal in placing a product in this scene in the first place. In its opening weekend, the first Iron Man movie grossed $98 million in the United States and Canada, ranking number one at the box office. It grossed $35.2 million just on its first day, giving it the 13th-biggest opening day. Getting your product/logo a spot in the, much anticipated, sequel to such a successful movie is the first appealing aspect. Getting it placed during a major fight scene where Iron Man takes on and loses to nemesis Whiplash, seems to become an opportunity you’d be foolish to pass up!

If you haven’t already figured it out, the product placement is a banner hung on the wall directly behind the action sequences which advertised for “Johnnie Walker”, a well-known brand of whiskey. According to one source, between the placement here  and very brief appearances in other scenes, it cost close to a million dollars! Let’s try to get a better idea if whether the cost was entirely worth it; take a look at the video below that displays where the 10 recorded participants looked as they watched the same movie clip that you just did.

After analyzing, we found that of the time the logo was featured it received 1.6% visual traffic and of the same participants, 0 out of 10 remembered the product placement after watching the initial clip. This seems like a crucial bit of information that I would have wanted to know, as the media buyer for Johnnie Walker, before signing a check.

The advertising industry is roughly a $131 billion industry where product placement spending accounts for roughly $4 billion and rising. Without the ability to measure visual traffic or consumer responses to certain ads, companies are left to place products based on criteria such as popularity of the show or box office hype. Johnnie Walker probably had the right idea buying advertising time in a movie expected to gross over $100 million opening night in the U.S. alone, but after seeing it tested on a group of participants, would they have thought twice?

The big question still remains, are product placements getting the return on investment they are chalked up to get? We now have the capabilities to find that out before it’s too late!